Whether you’re just starting out as a business or you’re rapidly expanding, you might be faced with the headache of needing to upsize your business premises whilst trying to keep expenses to a minimum. 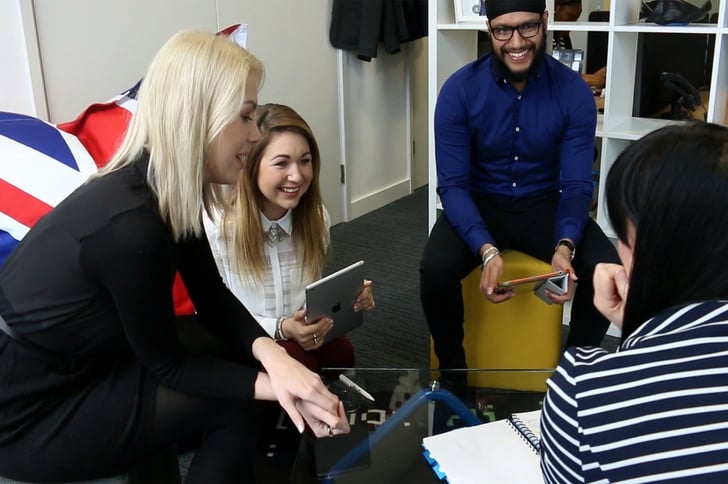 A co-working space could be the answer you’re looking for. Here’s why …

What is a co-working space?

A co-working space is a working environment that is shared by a mix of workers who are not employed by the same organisation.

You could have remote workers, freelance writers, designers, or any other professionals working under the same roof, but all for varying employers. It’s not only a great way to cut office costs, it could also help you build up some invaluable connections for generating more business.

If you’re still not totally sold on the idea, here are some ridiculously successful businesses that started out in co-working spaces …

Timehop is a Facebook app that gives you updates on exactly what you posted on any given day, however many years ago. It’s a fun way to reminisce and reconnect with people who feature in your Timehop photos and posts – an insanely popular app that began life as a start-up in a co-working space.

Jonathan Wegener, founder and CEO of Timehop, insists that the co-working space gave him a real platform to launch from and believes such spaces are the future for emerging technology hubs.

When talking of his co-working days, Wegener said: “Having an awesome home to independent workers and entrepreneurs is crucial to New York City’s goal to become a major technology hub.” He’s eager to see what new companies can emerge from the same place.

The app that gave rise to the “selfie” and spawned a new generation of foodies and travel bloggers is another that began life in a co-working space.

The story of how Instagram founders Kevin Systrom and Mike Krieger met is one of many twists, turns, and failed ventures – but once the idea had been hatched, it took just eight weeks to develop the app, before it was launched on Apple’s iOS.

Within just a year-and-a-half of that launch, Facebook had bought the company, outright, for $1 billion in cash and stock!

Indiegogo is the go-to portal for any budding entrepreneur, having raised more than $800 million, over 600,000 projects in 223 different countries – not bad for a business that started life as a crowdfunding website back in 2008.

Co-founder Danae Ringelmann was a Wall Street analyst who wanted to find a way to ‘democratise’ fundraising and, along with fellow co-founders Eric Schell and Slava Rubin, launched Indiegogo at the 2008 Sundance Film Festival as a way to fund film projects.

It’s now one of the world’s biggest crowdfunding portals. It supports all manner of start-ups, from the idea stage right through to marketplace.

Uber co-founders Travis Kalanick and Garrett Camp set out to devise a way around San Francisco’s terrible taxicab problem and found themselves fronting one of the world’s most disruptive start-ups: one that now operates in 633 cities worldwide and has backing from the likes of Google Ventures and Fidelity Ventures.

Back in 2011, Christy Liu, co-founder of Wanderfly, described the start up as “A travel inspiration site that helps people discover new experiences based on their budgets and interests.”

Liu started Wanderfly with three other co-founders, and a handful of employees, to manage production, business development and content – all working in Projective Space in Soho, New York.

The ethos behind Wanderfly was that a close-knit team could work with other creative types in a shared space to fill a huge gap in the market for travellers. Wanderfly gets rid of the narrowing search parameters that restrict traveller choices and replaces them with more open-ended search parameters and results to inspire every trip.

Just one year after it was launched, Wanderfly was bought by travel mega-site TripAdvisor for an undisclosed sum.

That’s the story of just five small start-ups that have successfully used the co-working experience to help grow their business. These examples highlight how a co-working space is much more than just an effective way to cut overheads – it can provide the inspiration and platform to take your idea to the next level.

If you’re looking to move your business into a vibrant and inspiring workspace to help your business grow, get in touch to arrange a tour of Orega's co-working space:

How Much Office Space Do I Need Per Person?

Choosing the right office size is key to creating a safe, comfortable and productive working environment for your employees. Miscalculating how much office space you need is a very common mistake businesses make and can lead to unnecessarily high overheads or cramped workspaces. At Orega, we...

There are proven benefits of good mental health on overall wellbeing, job satisfaction and productivity at work. In these unprecedented times, peoples' mental and physical health will have been tested.

As we all start to return to the new working world, there is going to be more reason than...

6 ways to work smarter as a small business

To increase productivity as a small business, your strategy shouldn’t be working harder for longer hours at the cost of your health and leisure time. Success comes with working smarter and taking advantage of tools, resources and adjustment of the day to day running, to achieve a more effective...

Is staff productivity impeded by a dated office design?

Have you ever considered how your office design could be having a negative impact on the way your employees work?

A new survey undertaken by YouGOV of 1,000 Britain-based office workers has revealed that 30% of employees believe their workspaces are outdated and uninspiring.

Is your office design having a negative effect on your employees' mental health? Nearly a third of all UK businesses now say that mental health is a bigger issue than physical illness among employees, with record numbers claiming on their insurance for mental health treatment.

Staying as productive as possible in the workplace can be a challenge, especially when there are many day-to-day distractions that are often unavoidable. So where does that leave you? How do you boost your productivity when things start to get a little too much?